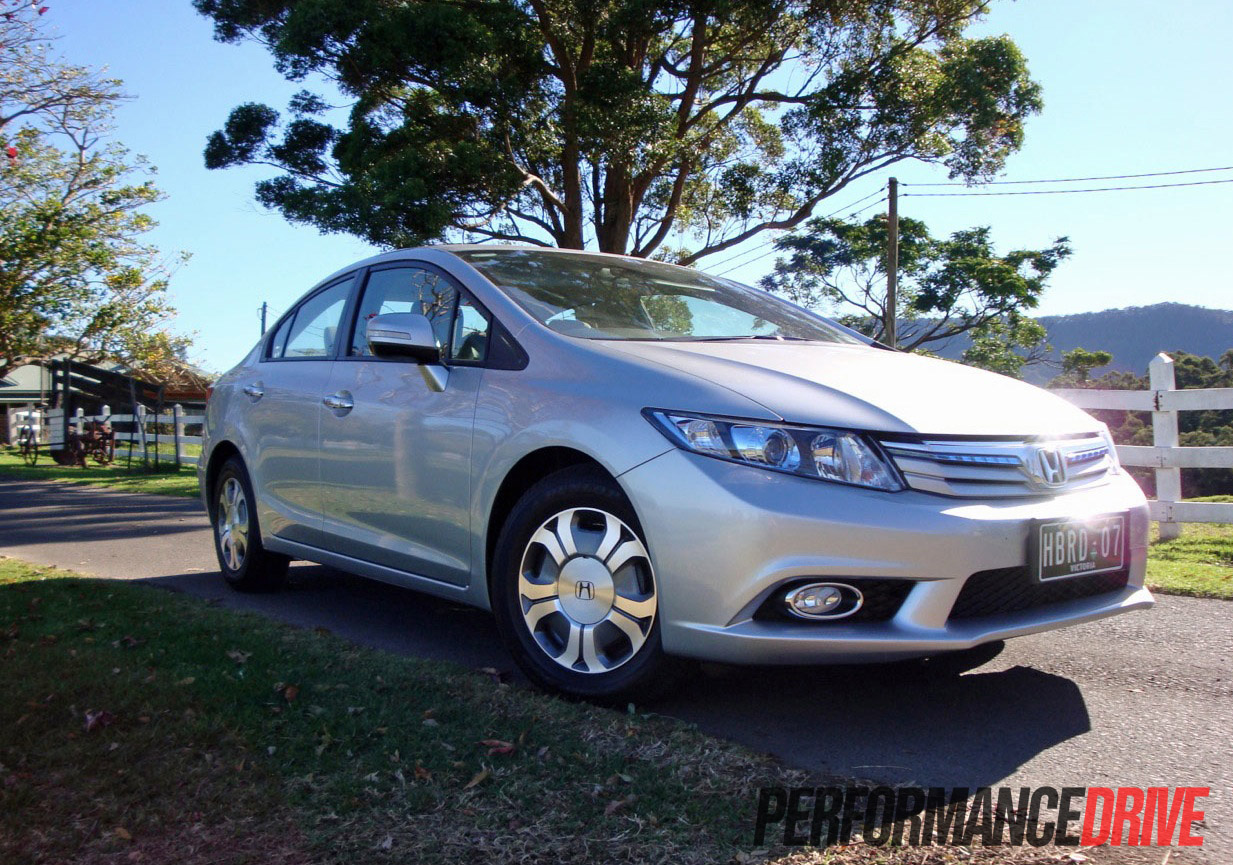 The Civic is considered one of the sportiest options in the small car segment, so we thought we’d do a quick test on the new 2012 Honda Civic Hybrid to see if any fun can be had in it. While hybrids are certainly no sports cars, they are believed – by some – to be the way of the future. 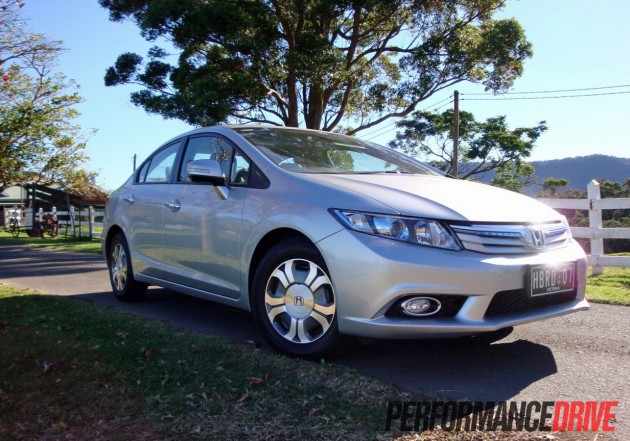 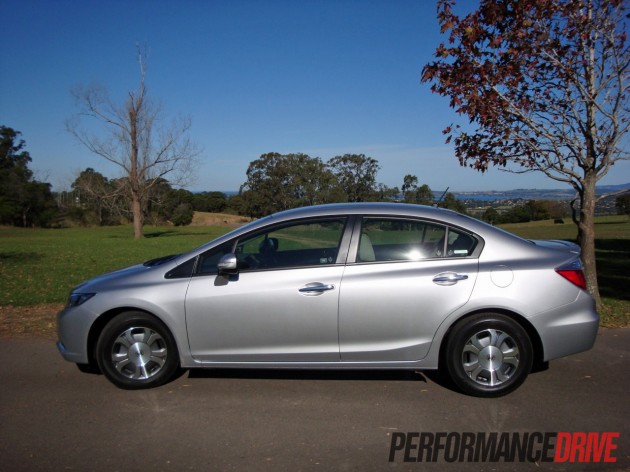 From the beginning, hybrid vehicles have had a rough ride. Due to their leadership in innovation, they have endured the highest levels of scrutiny. However, the new Honda Civic Hybrid goes a long way to improve the technology’s reputation, doing a very good job in making a hybrid a rather normal car.

As you may remember in the Civic Sport review a couple of months ago, the new Civic has stepped up in terms of overall quality, and comes with freshened up exterior styling. Pricing has also been revised across the range, with the Civic Hybrid kicking off from $35,990 – $1500 more than the previous model. All other variants have seen a price drop.

The 2012 model comes with a new 1.5-litre petrol engine replacing the previous 1.3-litre arrangement. Despite the downsize, Honda says acceleration has been improved at highway speeds. 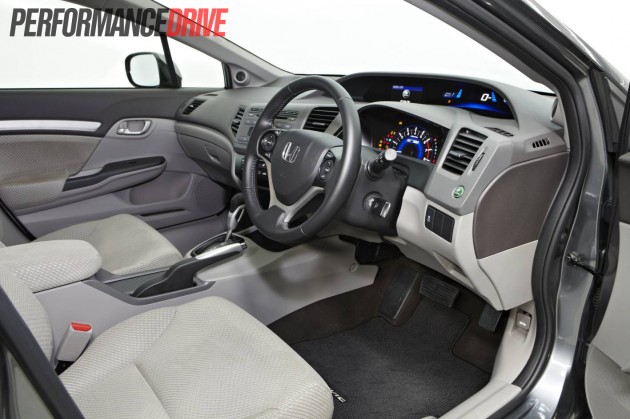 Features and quality feel are not compromised with the Civic Hybrid. From the very good sound system, to the soft-touch metal buttons, the bright headlights, and the icy cold air-conditioning, all the features are certainly not below their standard.

While the seat position feels quite low, the seats are surprisingly comfortable and reasonably-sized for a small car. There is a quality feel to the grey cloth trim too, and the auto climate control is very accurate.

As for quibbles, the incessant beeping whenever you leave the keys in the ignition with the door ajar is unnecessary and annoying. While many manufacturers do this these days, the warning buzzer in the Civic certainly isn’t subtle.

Distinguishing features for the Hybrid include special aerodynamic 15-inch alloy wheels and a more filled-in chrome grille at the front for improved air flow. Inside also comes with an intelligent Multi Information Display (i-MID) showing various economy-minded readouts, including an ‘eco score’ – more about that later on. 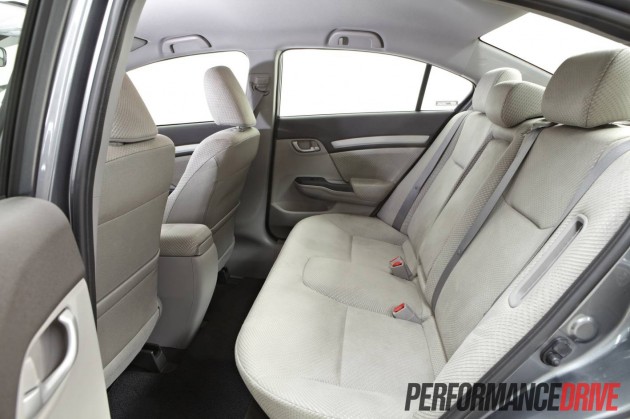 The rest of the cabin is virtually the same as the rest of the Civic range, with cloth interior like the VTI-L. The rear seats are fixed in the Hybrid, while the Sport and VTI-L get a 60/40 split-folding setup.

Like the Sport previously reviewed, the cabin provides a light and airy environment, with acceptable levels of rear-sear comfort. It also comes with a great six-speaker stereo – the rest of the lineup gets a four-speaker system – with speed-sensitive volume compensation, and USB/iPod compatiblity.

The standout to the Civc’s interior is the split-level 3D-style displays on the dash. There’s a digital speed in the furthest, central position ahead of the driver, while the tacho sits just in front of the steering wheel. 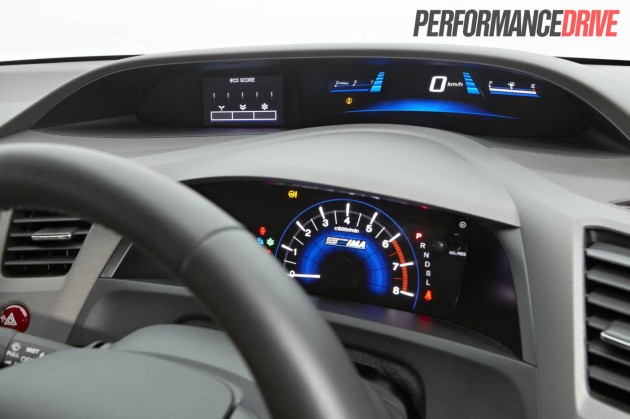 Dash information and driver feedback is plentiful; so much so that it can distract your attention from the road ahead. Sometimes we missed the good old-fashioned speedometer needle – only a digitally numbered speedometer is present in the Civic. We can’t help but wonder why it can’t have both.

Throughout the cabin there is plenty of silver highlights and grey tones used, even the seat belts are silver. It’s a nice blend of three or four different shades, providing a modern look. The small-ish three-spoke steering wheel is nice to hold, while the modern theme is carried over to the steering wheel soft-touch circular button designs.

As for safety, there are six airbags on board, an LED central brake light, electronic brake distribution, and traction and stability control. Australia’s ANCAP has given the 2007-model and onwards four stars, with a rating of 29.71 out of 37. After the latest tests ANCAP said “the passenger compartment held its shape well. Protection from serious leg injury was marginal for the driver”. 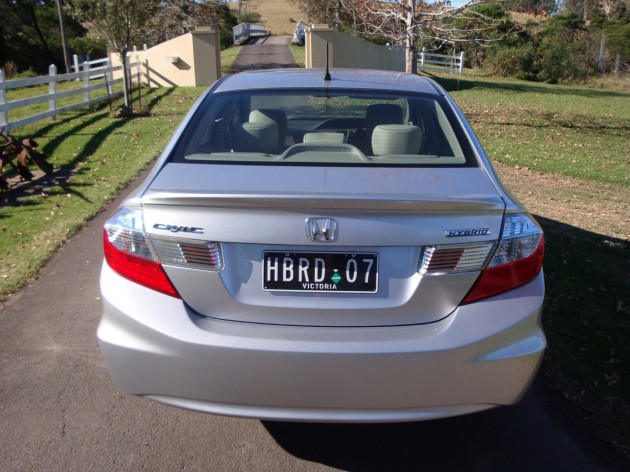 The new Civic is a great steer. It feels planted on the road and the chassis feels rigid and confident. Those familiar with earlier Civics will appreciate the low-down driving position matched with sharp and responsive steering; a little bit like a go-kart.

As for the performance of the hybrid package, the Civic, as you might have guessed, won’t have you reaching for a neck brace every time you nail the throttle. Instead, it sort of just moves off the line and takes you where you point the steering wheel in a gentle manner; without any fuss or commotion in other words.

Of course, you could put an eggshell under the throttle of those that buy this car, and it will probably never crack in the ownership lifetime. Still, it’s a new car on the market today, and PerformanceDrive is here to test out the performance of sporty-based vehicles.

We timed 0-100km/h in 10.2 seconds. Although it’s far from quick, Honda says that thanks to the new 1.5-litre petrol engine, acceleration for the 0-100km/h sprint has been reduced by 1.3 seconds over the previous 1.3-litre hybrid Civic. 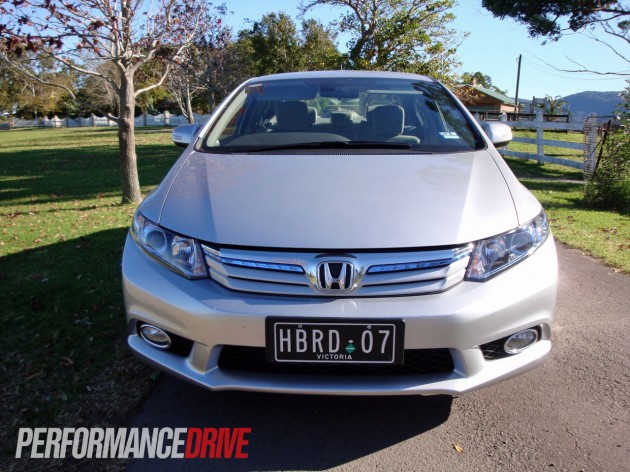 The CVT transmission works well with the engine and the IMA (Integrated Motor Assist); it feels like it is equipped with a lot more than its 82kW and 172Nm. Like pretty much all CVTs though, little enthusiasm or inspiration can be drawn through the gear stick.

One thing you can do is use the electric motor’s torque to seamlessly pull away from the lights. It might not seem so, but it can gather speed quite effortlessly, almost with a hint of a sleeper element to it (especially without the sounds of a larger capacity petrol engine barking under the bonnet). 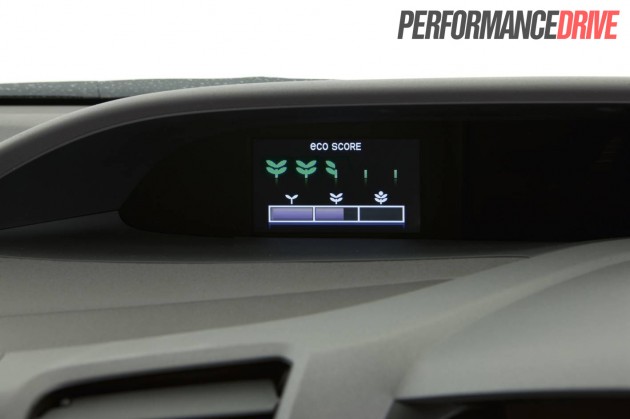 There are some nifty little innovative features that make you economy conscious, like the way it gives you a driving economy score at the end of a trip – while we never managed to score above the lowest rating, we also never failed to notice this fact, making for a moderately interesting challenge.

Company figures advertise 4.9L/100km, and 104g/km emissions on 91 RON rated fuel. We achieved 5.2L/100km during our test, and that was under completely normal everyday driving conditions, giving it a squirt through the traffic every now and then.

So fuel economy is up there amongst the market leaders. Although, other non-hybrid cars without the hybrid price-tag are near capable of achieving the same result, such as the Volkswagen Polo 66TDI (4.6L100km/h [auto])

If you really want to save fuel, there is the ECON button. Despite the fact that we didn’t use it all that much, it changes the engine computer and transmission’s brains to a setting which is super economical.

We found the setting mostly frustrating and impractical, and only really suitable if you plan on trying to survive a month without stepping foot in a servo.

The mode takes too long to get up to speed without really giving it the beans, and it sometimes feels as if there is a brick under the accelerator. You then become frustrated so you press the pedal deep into the footwell carpet, but then it hinders fuel consumption anyway.

The driver setting is certainly a great piece of technical adjustment, and a bit of a mechanical marvel, however, in the real world, we feel this button is best kept for when you’re having your 85th birthday. 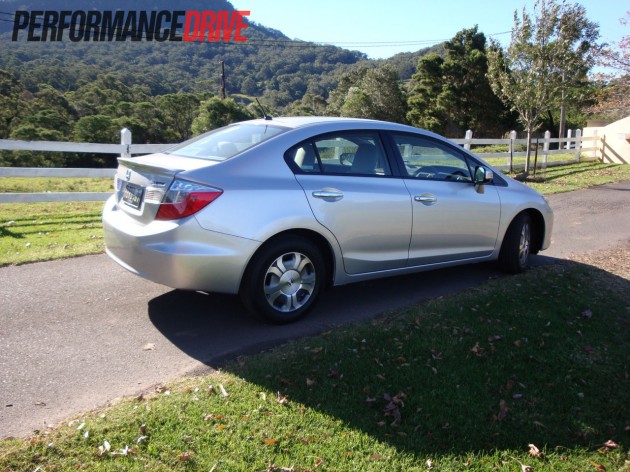 Overall, the new Honda Civic Hybrid does a great job at being a hybrid car – yes, we will continue to give it that label. But it goes a long way to bridge the gap between a hybrid and a ‘normal’ car, with minimum impedance on the driving experience and maximum economy.

Being a Civic, joy can be experienced through the steering wheel and overall driving character. Is it sporty enough though?

No. For that you need to step into the great little Honda CR-Z (CR-Z quick spin review here) if you really want to try and pair hybrid technology and sports car appeal. It’s available with a manual transmission – the only manual hybrid available on the market – and comes with a great-handling chassis, and funky body styling. 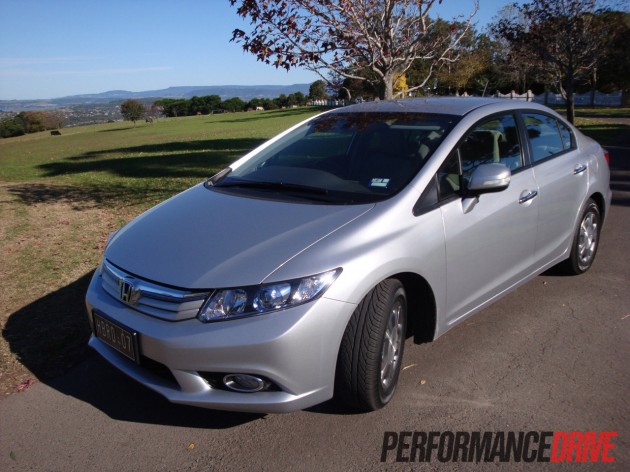 Nissan has confirmed it will launch the all-new 2022 Qashqai here in Australia in four variant levels, while announcing the...