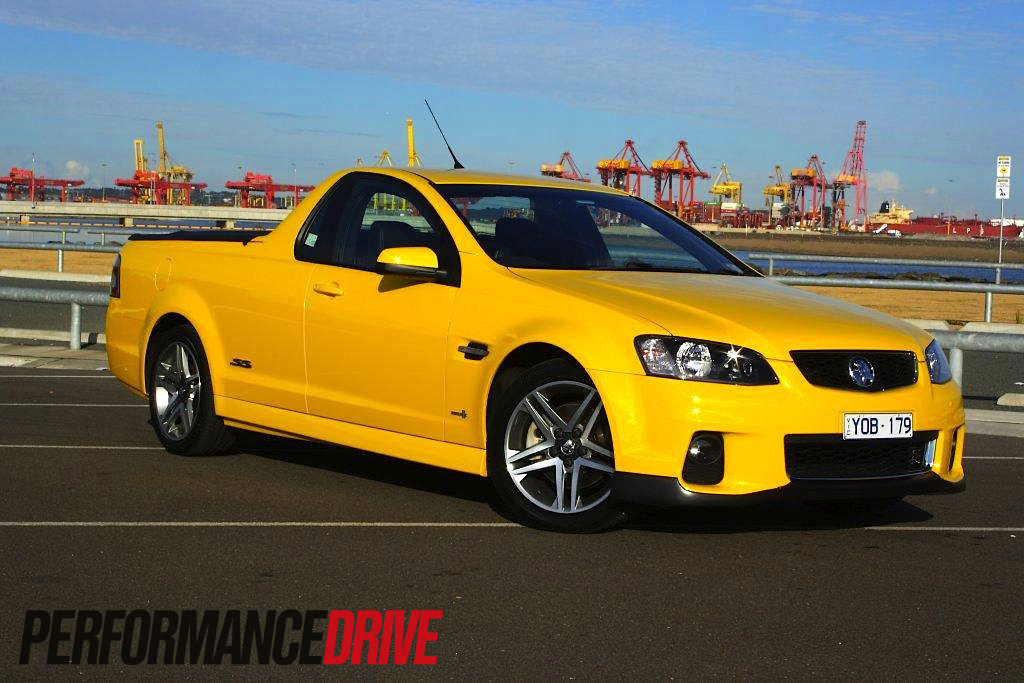 It might be a humble truck from Holden, but does the 2012 Holden Commodore Ute SS VE Series II have another personality? Is it also one of the best value two-door performance cars around? 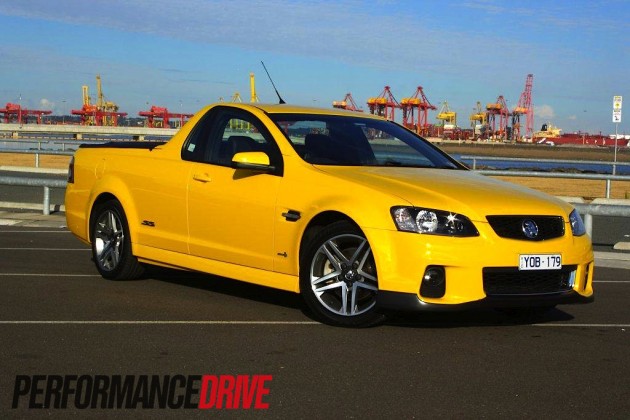 The 2012 Holden Ute SS is one of the most sophisticated utes on the market, in terms of the suspension and handling layout. It’s the only two-wheel drive ute currently on the market that features independent rear suspension, while up front the steering and suspension is carried across from the sporty SS sedan.

Being the SS, it’s also sprinkled with various sporty features and highlights, such as a bodykit and an aggressive front end – as seen on the SS sedan – and a sports-luxury-themed interior layout. 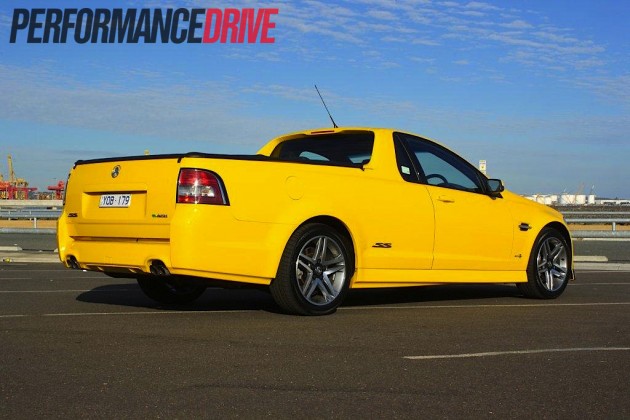 The SS version of the Ute comes with all the essential luxuries you want in a daily driver, including dual-zone climate control air-conditioning, sports seats, and a decent audio system. It also gets Holden’s latest iQ touchscreen interface with iPod connectivity, Bluetooth and even a 1GB on-board hard drive to store 15 CDs worth of music.

For more luxury you can opt for leather seats ($1250), as well as satellite navigation for another $990. It almost feels too good inside for muddy work boots and overalls, especially with these options as featured on this test vehicle. The interior makes you feel as though rugged and dirty equipment should be banned from the cabin. 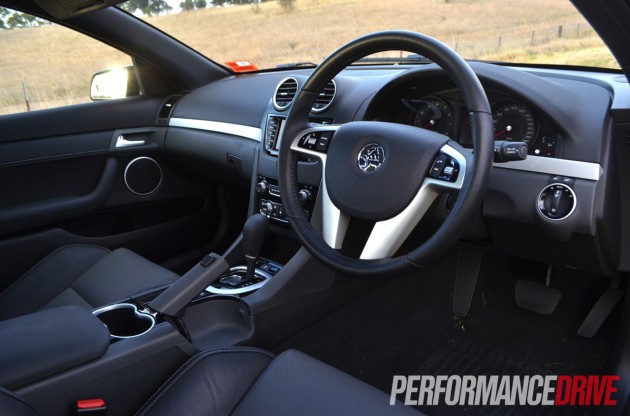 The cabin decor and layout is carried straight over from the Commodore sedan, minus the rear seats of course. Sure, the plastics used on the neat-looking dash and door trims and overall build quality isn’t quite perfect, but this is a utility vehicle; a workhorse designed to get jobs done. And for that, you couldn’t ask for anything more.

Even though it is only a two-seater, the two big chairs are very comfortable and the cabin is open and airy, and not claustrophobic. 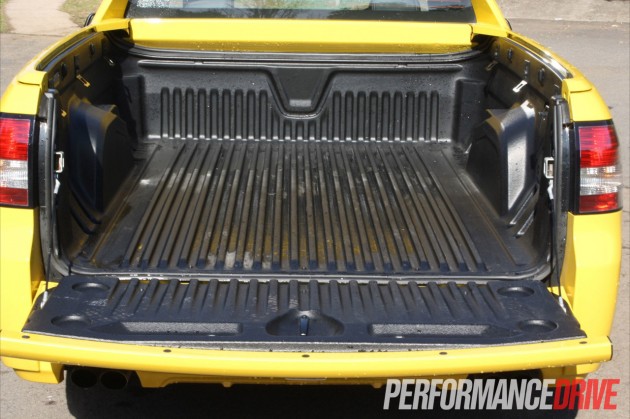 In the tray, all Holden Ute models are laid with a high-density polyethylene tubliner. This makes it easy to throw whatever you please in the back, without worrying about damaging metalwork.

Across the range, all models come with a soft tonneau cover as well. While it’s far from difficult, it can become a pain to remove and re-seal every clip, and seeing it flapping in the rear-mirror can be distracting. If you’re not hauling anything you need shaded from the elements, we’d probably leave it at home in the garage.

The optional hard-cover with polished aluminium sports bars, gas-strut lift assistance and a remote locking system would make a world of difference, but it will set you back an extra $3,600. For the convenience, security and looks, we reckon it’d be well worth it.

The exterior of the VE SS is still a great looking piece of metal work, despite its design being six years old (for the most part anyway). The SS Ute comes with plenty of bits and pieces to separate it from the Omega, such as 18 x 8-inch alloy wheels with 245-wide low profile rubber, fog lights, quad chrome exhaust tips and a sporty bodykit.

You can also add a lick of paint that will make your ute stand out from the crowd, if you wish. The example you see here is painted in a very exuberant ‘Hazard’ yellow, which – along with any shade other than white, red or dark red – costs an extra $500.

Based on the sedan, the Holden Ute is one of only six utes currently on the market that has been awarded five stars in ANCAP’s stringent safety tests. The Series II SS comes with dual front airbags, side curtain airbags, and of course stability and traction control. ANCAP has previously given the Omega base model 33.16 out of 37 after crash testing. 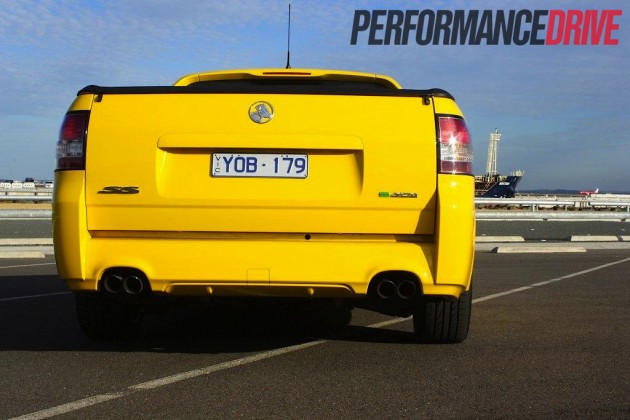 In a straight line, acceleration from the 6.0-litre V8 is absolutely brutal. The bellowing V8 soundtrack reminds you why you forked out the extra coin over the SV6. During rolling acceleration, you may kick yourself for not going with a manual transmission as the six-speed auto can hesitate before clicking down gears.

Pushing the auto stick across into self-shift mode does eradicate this somewhat, but it’s not quite as predictable as pushing in a clutch pedal and dropping two or three cogs in one hit.

On twisty roads, you won’t need to go ten-tenths to realise there’s little weight over those back tyres. When you enter a corner with the front tyres biting and the sharp steering giving you plenty of confidence, the rear end can become a bit skittish… but still predictable. 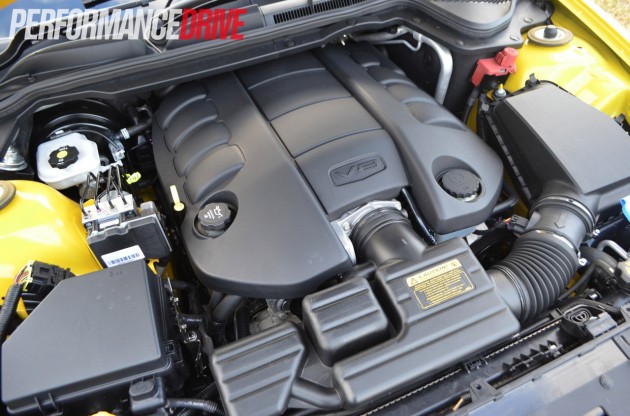 It can be plenty of fun in controlled conditions, but it can demote confidence on less-than-perfect roads. That’s not to say it’s part spoiled on the road, it’s mainly during mid-corner speeds. With so much power on tap and its decent braking ability, you can enter a corner fast and deep, and if you get onto the power well out from the apex, it can be very, very rewarding.

You can switch the electronic assistance off with a click of the button just in front of the gear shifter – powerslides and the general ‘hooning’ ability is high (and fun… but never on public roads). 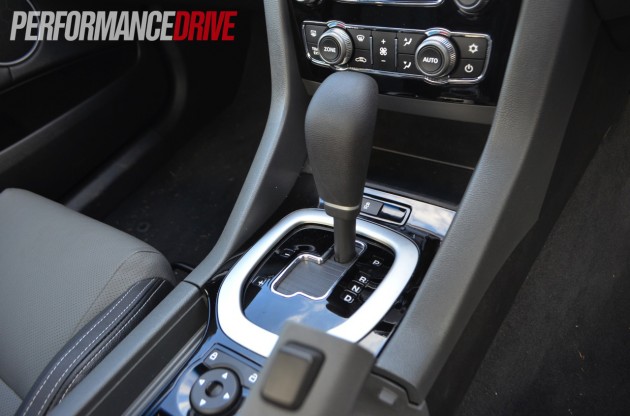 Whether the traction/stability is on or off, you’ll be equally involved in the driving experience. Your palms will be sweaty and you’ll have a smile ear-to-ear. Well, perhaps until you look across at the fuel gauge.

Three hundred and fifty horses are always going to eat a lot of hay; with the updated model and engines – introduced last year in the MY2011 – the SS comes with Holden’s Active Fuel Management (AFM), or, cylinder-deactivation technology in more general terms. 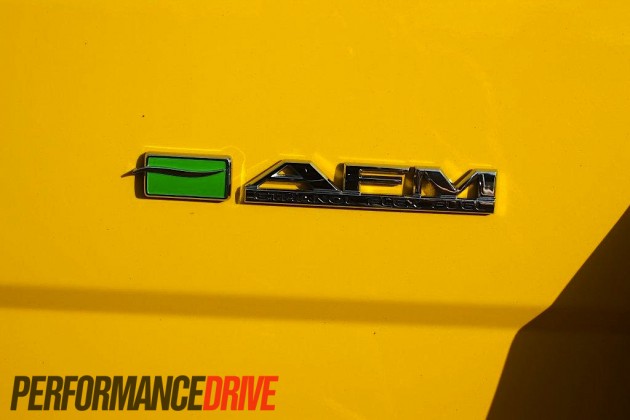 The system works by starving four cylinders under low load conditions, such as when your speed plateaus and you’re not climbing a hill. Just the slightest of inclines will have all eight cylinders firing back into life again.

Its operation is smooth and mostly seamless, in fact, if you didn’t have the digital screen in the centre of the dash fascia telling you what was happening, most wouldn’t be aware such activity is going on up front.

The AFM doesn’t turn the SS into a Prius, but it could potentially result in around $10-15 less fuel burnt on a trip between capital cities. That is enough for a six-pack of beer, so cheers to cylinder deactivation. For further savings, the SS Ute – and all new Commodores in fact – can run on E85 fuel.

It wouldn’t surprise us if the SS Ute doesn’t get a few buyers who aren’t even full-time trades people. With the V8 grunt up front, it’s a performance car worthy of also being a fun weekender.

If you don’t need more than two seats and constantly need to lug around large items like surfboards, motorbikes or a rottweiler, there are plenty of reasons why you’d love this supertruck in your garage. There is also loads of tuning potential… 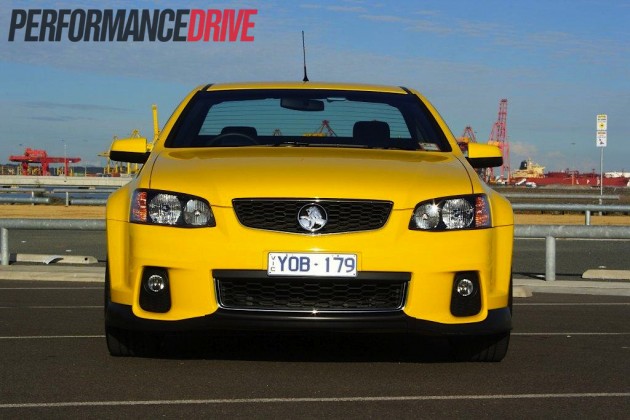 2012 Ford Falcon Ute FG MKII XR6 Turbo – 4.0-litre turbocharged six-cylinder, 270kW/533Nm – 1790kg (auto) – $41,190 (auto)
The turbo six-pot ute from fierce rival maker Ford is a rocket ship with wheels and a tray. With a more archaic rear suspension setup, it’s handling can’t quite match that of the Holden. If you bleed blue, it won’t worry you too much. It’s also around $3000 cheaper than the SS. And dare we say it, just as much tuning potential.