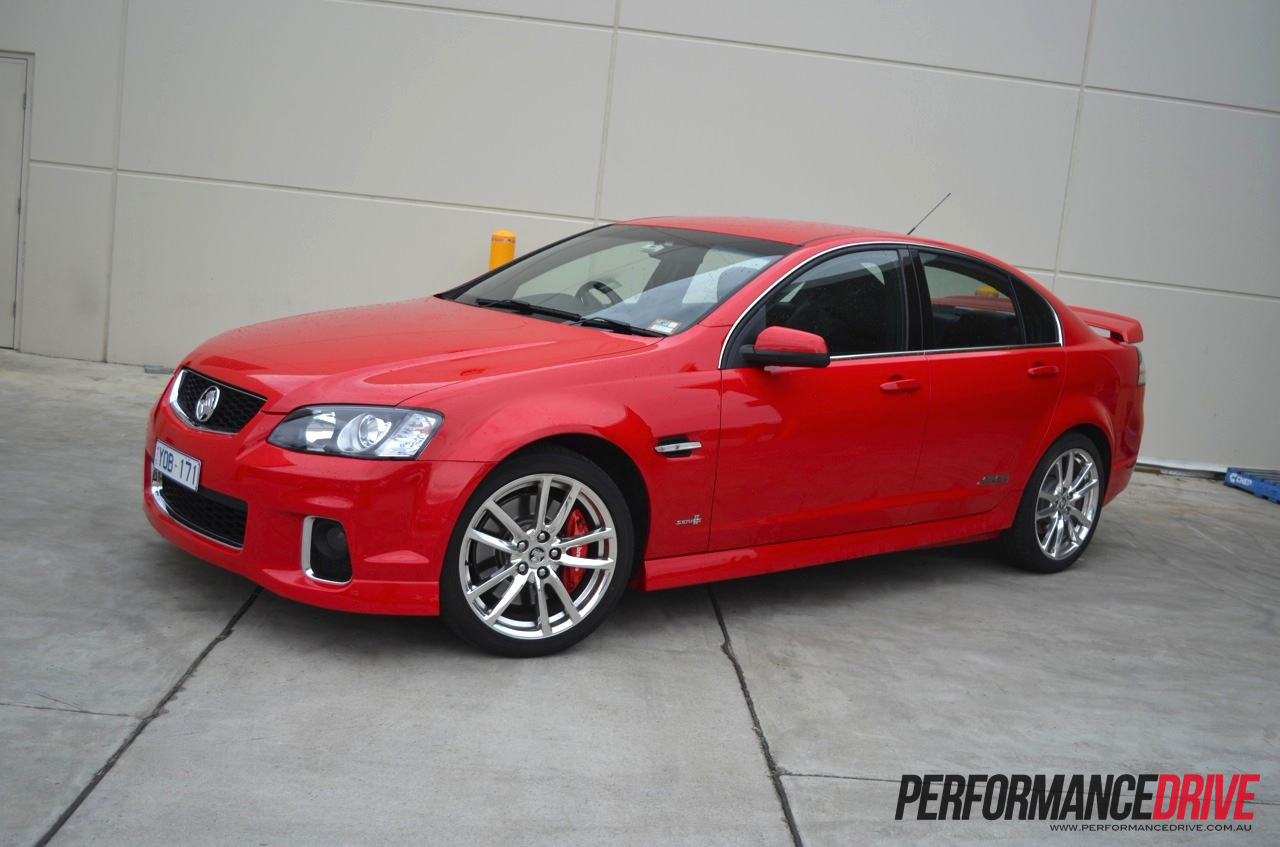 Like the name suggests, the 2012 Holden Commodore SS V Redline VE Series II has the instant ability to turn from your typical Commodore grocery go-getter, into a rev-happy performance car. 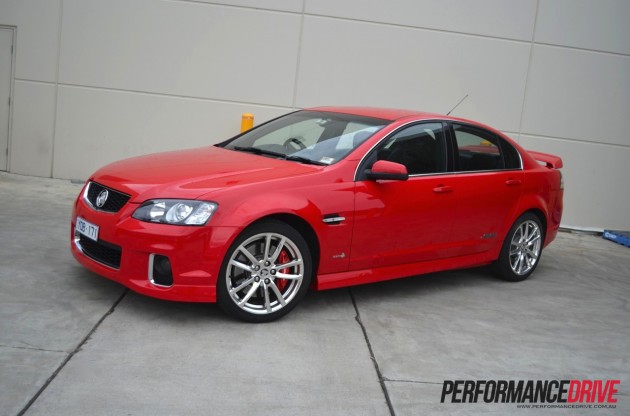 Essentially what the Redline nameplate brings to the regular 2012 Holden Commodore SS V is added performance; FE3 suspension (thicker sway bars, and firmer spring rates), Brembo brakes, and 19-inch forged alloy wheels. So, how much extra do you pay for this? The asking price for the Redline edition is $2500 more than the regular SS V ($57,790 over $55,290).

From the outside, the only give away it is anything other than a regular SS V is the shiny forged wheels, and the twin-piston clearly marked Brembo front calipers. The 2012 VE Commodore SS V Series II front end is a touch softer on the eye than the outgoing model, now with an ever-so-slightly revised front bar, featuring chrome/silver highlights around the grille and fog lights.

Our test model is the six-speed automatic transmission option. Automatic models get a slightly detuned version of the 6.0-litre V8 engine, producing 260kW and 517Nm – 10kW and 13Nm down on the manual versions.

All automatic V8 models also come with Active Fuel Management (AFM). AFM is Holden’s cylinder-deactivation technology. It’s able to cut four cylinders from the combustion sequence when the engine is under low load conditions, saving fuel. The official fuel consumption rating for the Redline auto is 12.3L/100km, which is still slightly higher than the more powerful manual option which is rated at 12.2L/100km. 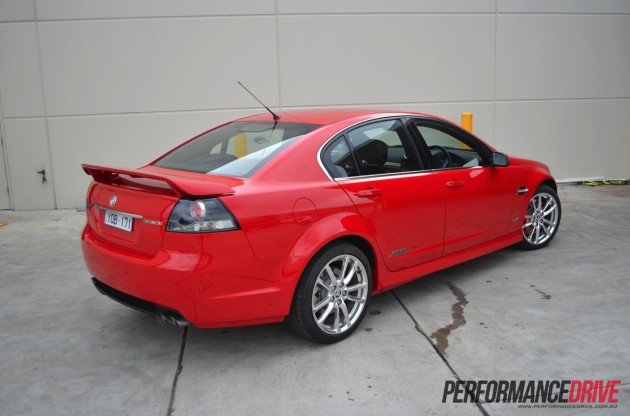 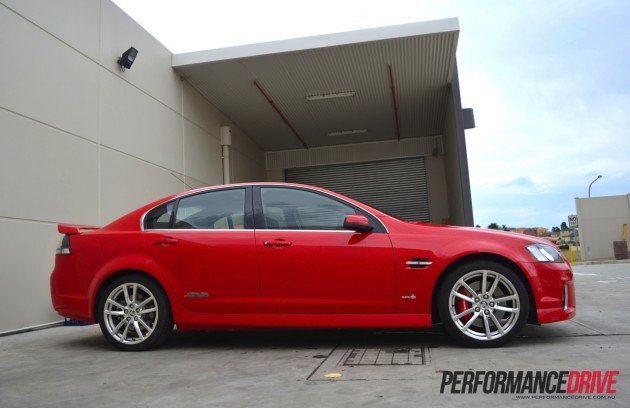 On the road, it’s SS Commodore business-as-usual. From a standstill, the very eager 6.0-litre V8 offers loads of low-down grunt, 517Nm, and builds power right up until Redline (see what we did there?). If you love a good V8 soundtrack, there really isn’t much better under $100,000.

The FE3 suspension really helps the Commodore to feel more like its HSV cousins. While the regular SS V does a commendable job of feeling enthusiastic on the road, the Redline’s FE3 helps the large sedan hide its hefty kerb mass (1740kg), making it feel more welterweight than heavyweight.

Grip and traction is fantastic. You’ll find it hard-pressed to get the rear to slide, or the front to push wide. Steering feel and weight is a good combination of easy around town, and heavy/solid enough out in the open stuff. 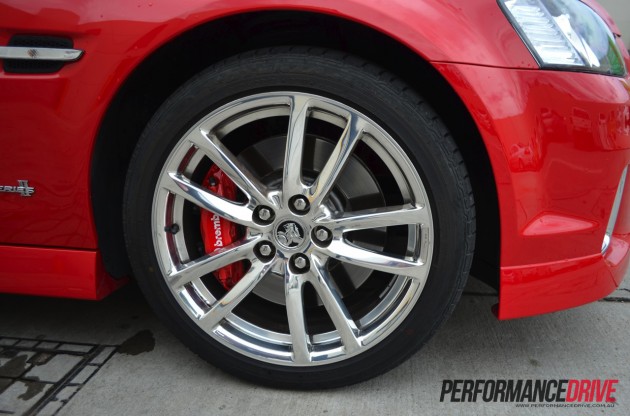 The thing that will really get your heart rate redlining is the Brembo brakes. They are something the driver can depend on, corner after corner, offering a good, meaty feel through the pedal and excellent stopping performance.

The six-speed auto trans is a good unit. The gears are well-spaced for impressive acceleration, and by using its gearbox smarts, does a good job of changing gears to suit your style of driving at the time. You can opt for a more sporty drive mode by pushing the lever in S-mode, using the +/- to navigate through the gears for a more active experience.

Either way, the auto gearbox makes good use of the engine’s torque, and can hold until the redline, should you want it to. Unfortunately, there’s no blipping on the downshifts or anything fancy like that.

For those who’re curious about the AFM system: during highway cruising, we continuously saw the ‘4CYL MODE’ light on the dash, followed by the instant fuel usage readout dropping from around 12L/100km to 8.5L/100km. The system kicked in after we lifted off the accelerator, or when cruising on very flat and slightly downhill roads.

The instant fuel readout shows AFM can be affective, but as far as counting on it to make running a V8 economical, it’s really not as great as we would have liked. Though, it is worth mentioning our combined fuel usage in the SS V Redline was lower than in the manual 2012 Holden Commodore SS V we recently reviewed (18.6L/100km vs 20.7, both tested on E85 fuel). 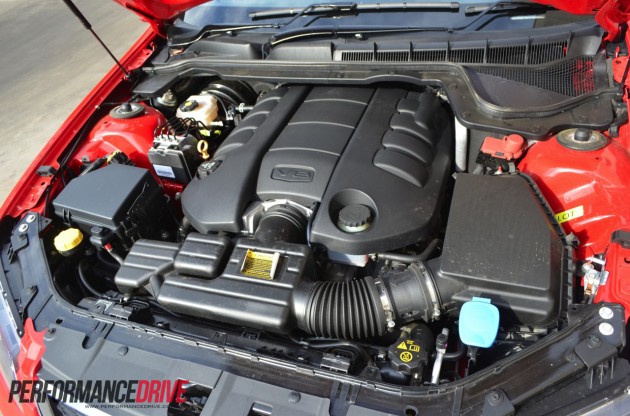 Inside the SS V Redline you’ll notice plenty of red highlights, such as red plastics used on the dash, and red leather sections on the seats. The seats are exactly the same as you get in the normal SS V, support and comfort wise. They’re good for people of all sizes, with adequate lumbar and lateral support. 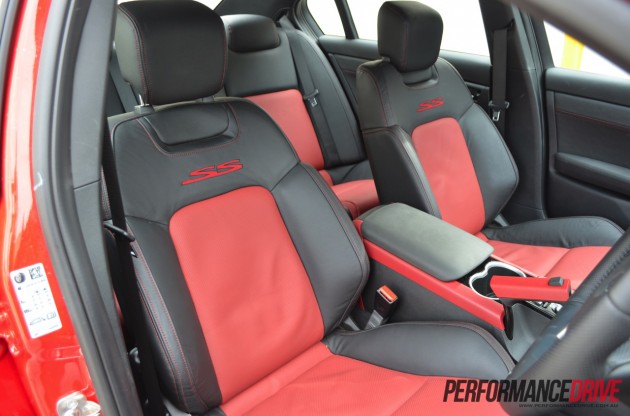 Like in other VE Commodore’s we’ve tested of late, interior refinement isn’t outstanding, though, all the switch gear, and Holden’s iQ infotainment system (equipped with CD, MP3 and USB compatibility) is easy to navigate and operate. We found out you can only fiddle with your iPod when the car is static. Bummer. But safety comes before changing songs.

Cabin space has to be one of the VE Commodore’s greatest assets. You’ll never be short on legroom no matter where you sit. You could even sleep in the boot we reckon, it’s that big. If there was one thing that annoyed us while we drove along in our test car, it would have to be the road noise generated from the 19-inch low-profile rubber. They cause a bit of racket.

Like every VE Commodore, you get reassurance of five-star ANCAP safety. The SS V Redline comes with Holden’s latest stability control and traction control, six airbags (front, front side and curtain), ABS, and EBD as standard.

In theory, by running the Redline on the cheaper E85 fuel, coupled with AFM technology, it should be somewhat ‘affordable’ to run, right? Our test model returned an average of 18.6L/100km in combined highway/city driving conditions. This is a great big V8 we’re talking about here, so you can’t expect it to be marvelous, but it is still very high.

Turbocharged smaller capacity engines have proven there is a substitute. One look at a brand new AMG or BMW M car will show you that. There were reports of GM working on a twin-turbo small-capacity V8 for the upcoming Chevrolet Corvette, so it is good to know the technology could be in the pipeline.

All that fuel jargon aside, and back to performance car specifics, for $2500 more than the regular Holden Commodore SS V, the SS V Redline edition represents outstanding value. The FE3 suspension tune alone is worth the extra, as are the Brembo brakes.

The blingy, highly-polished wheels won’t be to everyone’s taste, nor will the colour-coded trimmings inside the cabin, but there is a range of up to 11 different colour combinations available.

If spending an extra $2500 for an ultra-impressive suspension and braking package takes your fancy, then forking out an extra $350 for a full-size alloy spare, and $1990 for an electric sunroof should be on your options list – it’ll add a touch more fanciness to your V8 and add to residual value. There’s also a prestige paint colour option available for $500.

The Redline edition gives buyers a good reason to get into a Commodore, and with all this ‘shared GM platform’ and ‘shutting down plants’ talk, they might not be around for much longer. But for now, they kick on. And in the arrangement of the SS V Redline, they kick quite strongly. 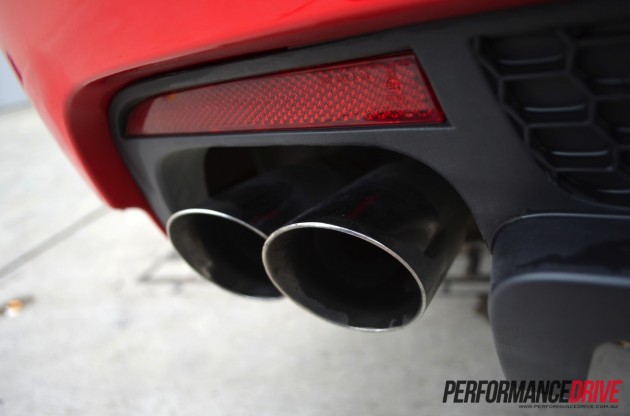