PerformanceDrive is about driving, and for those who enjoy driving, no matter what the car. With petrol prices climbing higher and higher, there comes a point in all our lives when we become intrigued by new super-frugal vehicles. 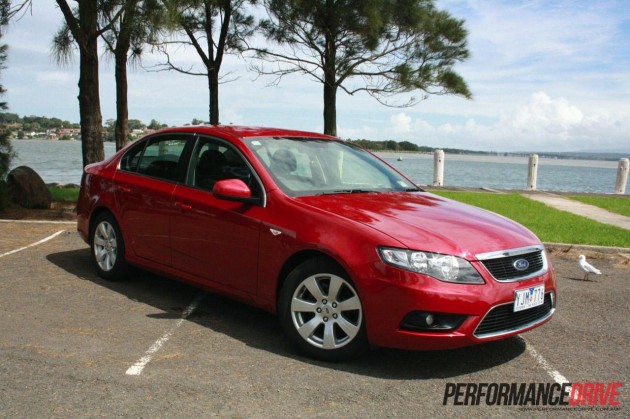 One look out into the new car market and you’ll clearly notice a fuel-conscious ‘green’ variant in just about every manufacturer’s line up. We thought we’d put Ford’s new EcoLPi Falcon, the 2012 Ford Falcon G6 EcoLPi to be specific, for a long journey to see how much it actually costs to run. We’re not talking hyper-miling, just normal driving under real-world conditions. 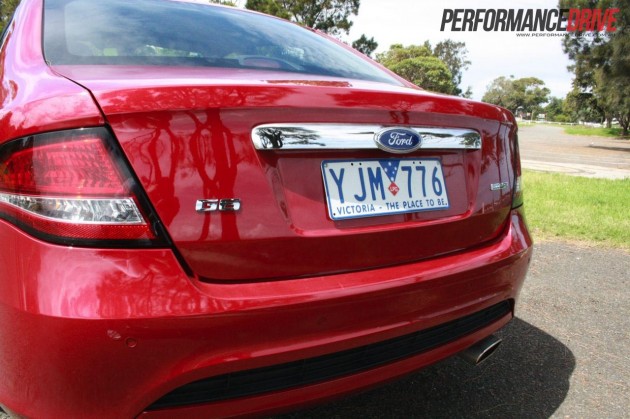 The 2012 Ford Falcon G6 EcoLPi is like any other Falcon. It still comes with the usual 4.0-litre straight-six engine, only it is equipped with a relatively new technology called an LPG Liquid Phase Injection system, which means it runs on gas, and only gas. It achieves an average fuel consumption rating of 12.5L/100km, compared with 9.9L/100km of the normal G6 petrol.

Even though the consumption rate is higher than the normal petrol, LPG is much cheaper at the bowser, and much cleaner to the environment. The cheaper initial outlay means, in theory, you save more in the hip pocket. Ford says that a driver averaging around 15,000km per year would pay $2153 in fuel driving the petrol Falcon (at $1.43/L), and just $1125 for the EcoLPi (at $0.60/L). That’s a saving of just over $1000. 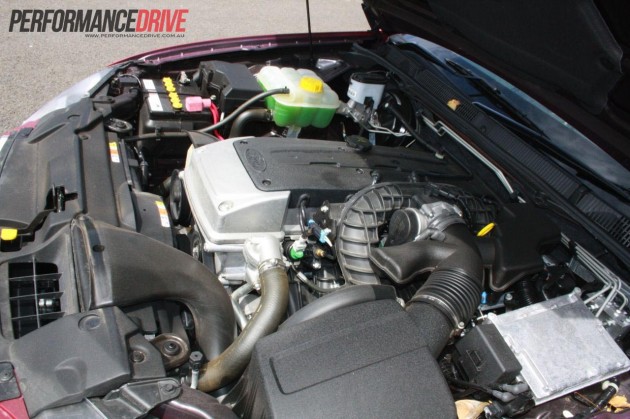 To kick off the run, one question has to be answered; is the performance of the six-cylinder Falcon still present in the EcoLPi? Because if you find you’re paying less per year on fuel but end up getting to work late because there’s no power left, the savings could become costly.

We can gladly say, it is. There’s still loads of torque, and anywhere above 4000rpm, the trademark roaring six-cylinder grunt still pulls like a train. The 4.0-litre engine is actually more powerful than any other naturally aspirated six-cylinder Falcon, ever made. It produces 198kW and 409Nm – compared with 195kW and 391Nm of all other Falcon sixes currently on sale.

The only real difference that you may notice, if you’re really picky, is a slight difference in low-down torque. It’s not that there isn’t enough, we feel the power and torque band is simply a bit different than that in the normal petrol. A way around this if you’re keen is to simply use the gears and find the best rev-range for the conditions. During fairly hard driving the engine responds well in kick-down, and really shifts the big G6 just like normal. 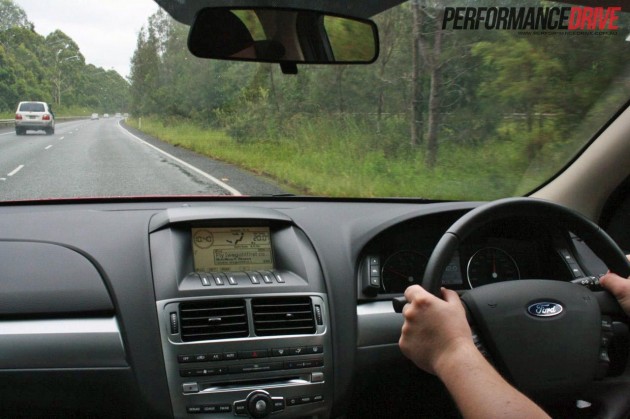 Our run involved driving from Brisbane to Wollongong; a 1030km trip. We brimmed the tank and headed off. The weather was overcast and rainy for most of the trip, which might have hindered consumption.

We were happy to be in the big 2012 Ford Falcon G6 for the run, as there’s heaps of room in every area. The centre console is huge, the rear seats have plenty of legroom, even the glovebox is an up-size. Since it is the G6 it also comes with a moderately luxury interior, with plush velour seats, Sports Control Blade independent rear suspension, and an iPod/Bluetooth compatible ‘Command Centre’ entertainment system. 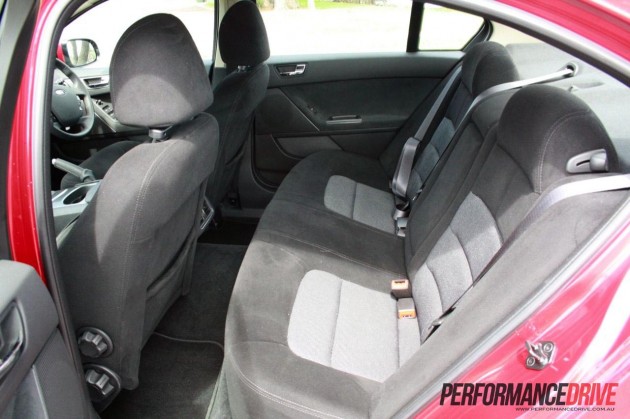 Our first stop was in Grafton, we achieved 315km while the gauge was reading just above half full. Obviously we could have keep pushing on but we thought we might as well take a break from driving and stretch our legs. It was at this point we packed some supplies into the boot and realised the spare tyre takes up some of this space. Since the LPG tank is mounted in the floor of the boot, it means there’s nowhere else for the spare to go. 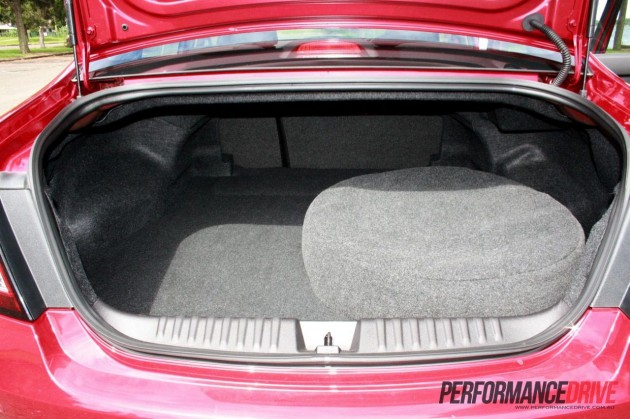 It is a bit of an inconvenience, we can’t help but think Ford could have implemented a space-saver spare of some kind. But then again, a full size spare is also praised by customers. On the plus side, the Falcon boot size is quite large, so you really need to be doing some serious shopping to fill it right up. 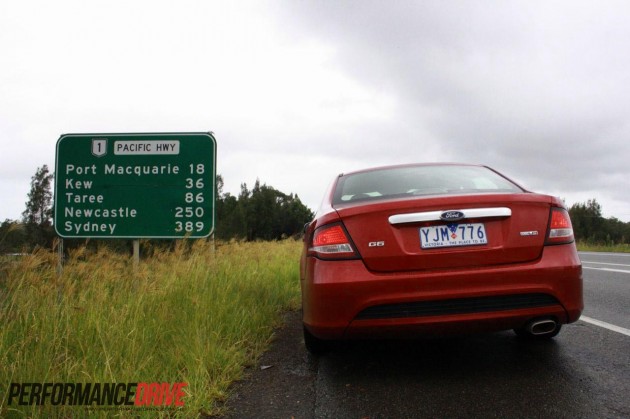 Our second stop was in Kempsey, 188km later, giving us total coverage of 503km. The fuel gauge was reading just under quarter full at this point. Not knowing when our next stop was, we decided to fill the tank back to full. At 73.9 cents/L; it cost us all of $44. It made us realise the EcoLPi is a great proposition, especially one to consider if you have a family and enjoy doing long road trips. 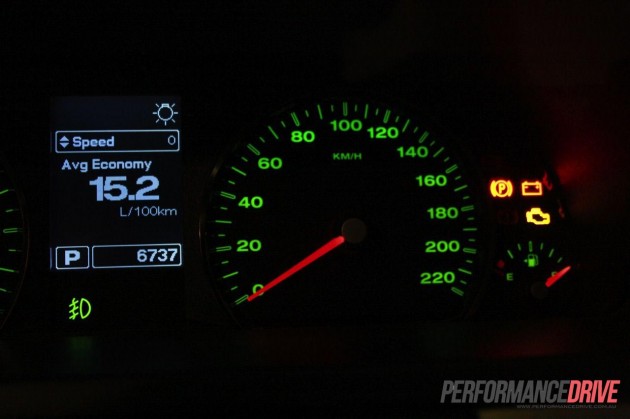 For our next stop we decided to go the full way. The tank was full, everyone was refreshed after some food and drink. Next stop, Wollongong.

After going through heavy storms and narrowly avoiding some rural flooding, the 2012 Ford Falcon G6 EcoLPi arrived in Wollongong 526km from Kempsey. The full gauge was reading in between the last quarter and empty. The trip computer said the tank still had enough left in it to get a further 106km.

So from Brisbane to Wollongong, 1030km, the new EcoLPi Falcon cost us approximately $90. Not bad considering we had three people in the car; three separate plane tickets would have cost a lot more.

The EcoLPi shows large Australian sedans can be quite economical. Holden has also just released its version, the dedicated LPG Commodore.