Mopar, service and parts division of Chrysler, is celebrating its 75th anniversary. To kick off the party, it has unveiled the 2012 Chrysler 300 Mopar, showcasing a number of unique revisions. 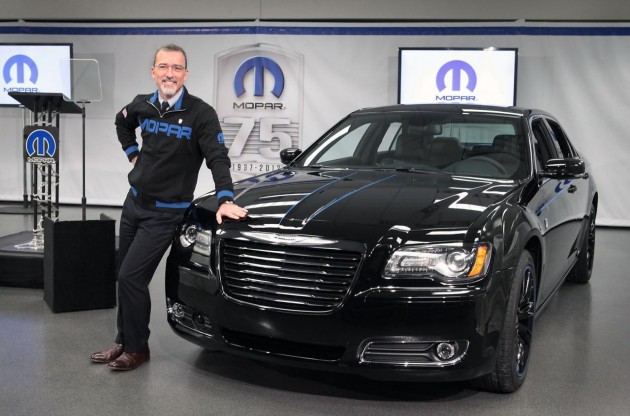 Keeping with the black menacing character, there’s also a set of black, blue-rimmed 20-inch alloy wheels. These are tucked in the guards with new sports lowered suspension, and hide a more serious braking package compared with the standard 300.

Inside is reupholstered in black Katzkin leather, while piano black highlights compliment the dash. There’s also a smattering of carbon fibre trimming, with die-cast paddle shifters behind a sports steering wheel.

Under the bonnet sits the same 5.7-litre HEMI V8 producing 271kW. However, the final drive ratio has been increased to 3.9:1 to offer improved acceleration. Mopar says the change allows the big bruiser to hit 0-100km/h in the 5.0-seconds range.

The 2012 Chrysler Mopar will hit the US market as a complete package, straight off the showroom floor, halfway through this year. Prices will start at US$49,700.