BMW has revealed the 2012 BMW M6 MotoGP safety car, dressed in full BMW M livery. The car’s first assignment will be at this weekend’s Nurburgring 24 Hours event in Germany. 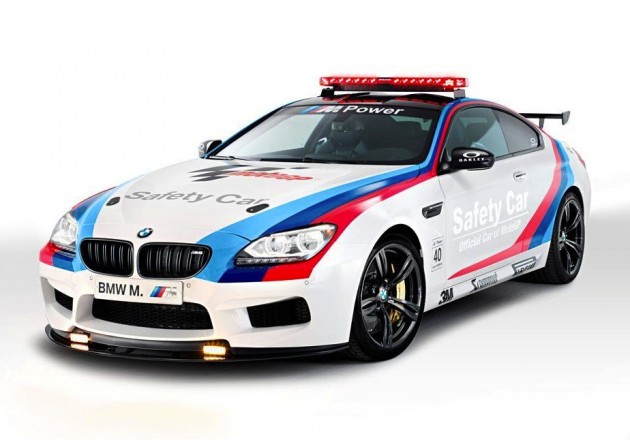 Apart from the obvious exterior colour scheme, the BMW M6 MotoGP safety car also features some discreet styling and aero tweaks. At the front there’s a new spoiler and splitter and a gloss black grille, while the rear shows off a new wing for added downforce.

BMW M hasn’t mentioned if there are any changes under the bonnet, but the M6 is sure to be up to the task of leading the field in standard form. It comes with the same 4.4-litre twin-turbo V8 as seen in the new BMW M5, producing 412kW and 680Nm.

Thanks to the seven-speed M DCT (dual-clutch) transmission, acceleration from 0-100km/h can be handled in 4.2 seconds. Top speed is electronically limited to 250km/h.

The car will lead the M Corso parade at the annual M Festival at the Nurburgring this weekend, where the famous track will also host the 24 hour endurance event.